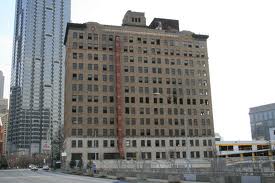 I read this article about a large format printer who worked with The Arts Council of Long Beach and the Long Beach Redevelopment Agency to transform a rundown building into a work of art. I immediately thought of the Medical Arts building here in Atlanta (shown on left) and if/how I could execute a similar project.

While doing some initial research on the building I found several building wrap ‘fails’, however, the wraps were ‘advertisements’ NOT works of art. These advertisements have been frowned upon because outdoor companies pay the building owners for the ad space creating no incentive for the owners to renovate. The building has (4) owners who purchased the property with the hopes of renovating it into a hotel. The project was abandoned (pun intended) after the downturn in the economy. With the effects of the recession still looming it could be years before renovation plans resume. Until then, why not make use of the space and create something great?

An alternate solution to wrapping the building would be to paint the exterior, using a transfer method to create a mural. Either way, I think the art concept would be palatable to organizations like the Atlanta Preservation Society or Central Atlanta Progress who could work in conjunction with local museums like the High Museum of Art and/or the Fulton County Arts Council to produce the large scale work of art. One art requirement/mandatory for the visuals would be NO LOGOS, only art. This selling point (or lack there of) could have great appeal to the decision makers. And the social/viral implications could be huge, especially for the City of Atlanta in general.

Somebody get me Kasim Reeds’ phone number, I need to make things happen.